Our newest Client Marketing Manager, Roxanne Gorham, recently attended her first trade show as part of the Kondracki Group team. After getting back from this year’s IBIE in Las Vegas, we sat down with Roxanne to discuss how the show went.

Keep reading to see what Roxanne had to say about the show! Q: What surprised you the most about the show?

It was my first time going to IBIE, but not my first time at the Las Vegas convention center. I was amazed at how big the baking expo was and did not expect it to be in more than one hall!

Q: You used to work in the beer industry. Was there anything at the show that made the experience similar to other shows you've been to?

Coming from the beer industry, I'm used to walking around trade shows where free samples of different craft beverages are often handed out. It was really cool to see the IBIE booths handing out baked goods. I had a freshly made donut for breakfast every single day from inside the show. There were mini cupcakes, bread, and tons of other treats being handed out, too. How sweet is that?

Q: On the flipside, what was different?

There were a lot of equipment demonstrations that I've never seen before including giant ovens, primary and secondary packaging systems, robotic options, and more. Everything from ingredients to robotic palletizers were at the show. There was even a booth that used a form of dough made specifically for their trade show booth that looks like ground beef, cheese, bread, and more. It was cool to see how things worked in action! 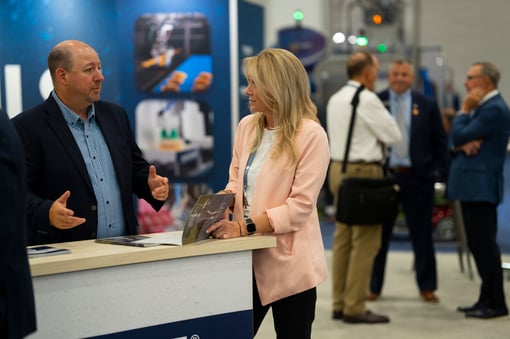 Q: Was there any equipment that was particularly memorable?

It was really amazing to see the JLS machines in person. Watching videos of the Osprey and Talon is one thing, but seeing them in person packing cases and loading sandwiches takes things to the next level! The SideDrive conveyors were on display too, and it was fascinating to see in person just how hygienic the design is! You can get to every nook and cranny on that system. I also got to see how loaves of bread get packaged in the FormostFuji booth, and then learn about the drives and other components that go into a lot of these machines at the LinMot booth.

Q: Was there anything notable from your media visits?

I had the opportunity to walk around with two different clients of ours for media visits, and it was a really cool experience. I was especially thrilled to meet Joanie Spencer of Avant Food Media and Commercial Baking. It was fun to see how many people she knows in the industry (hint: it’s A LOT), and how well she works with the KG team to bring our clients and their stories to the forefront of the industry's news. Her ability to share their latest achievements and upcoming improvements really helps our clients achieve success in their PR efforts, which correlates with the success of their overall marketing strategy.

Q: What’s something that impressed you at or about the show?

Working with the KG team at a trade show, this time David Smies in particular, was really something to see. David is pure talent with a camera. If you don’t already know, camera equipment can be ridiculously heavy. We must have run back and forth across the conference hall 2 dozen times, all the while David is reaching and bending at awkward angles just to get the perfect shots. We got so much footage that he was able to produce 7 videos within the next five days! Our clients received some amazing thank you videos that went out that very week - pretty impressive if you ask me.

Q: How did you and David prepare for shooting the photo and video footage at the show?

David and I spent several hours ahead of the show planning out how we would shoot four total booths, plus get some fun video and images for Kondracki Group. We took pictures and video of JLS, LinMot, Formost Fuji and SideDrive. Our planning had to be very strategic so that we could catch the right things at the right time.

Want to learn more about the booths we worked on for IBIE?

Stay tuned for our next blog post! In the meantime, check out our recap videos from the show and subscribe to our channel!